The mission of the Office of Diversity, Equity and Inclusion (ODEI) is to provide visible leadership and direction for the College’s efforts on behalf of diversity and inclusion; offer programs and provide guidance and assistance, both academic and non-academic, to underrepresented students; support and coordinate student groups that serve the needs of diverse student populations; develop programs and services to promote diversity awareness and understanding within the larger campus community; and be a resource to students, faculty and staff in their efforts on behalf of diversity and inclusion.

At McDaniel, we understand that marginalized and underrepresented groups require specific support. As part of this work, the Office of Diversity, Equity and Inclusion actively seeks to support the following student populations*:

*The Office of Diversity, Equity and Inclusion acknowledges the challenges of language when categorizing identity. We strive to ensure our terminology represents the above groups in the language that best reflects and affirms their individual and collective identities.

McDaniel College recognizes how important it is to have the ability to be addressed by the name that an individual prefers. Accordingly, procedures for preferred name policy are set and are intended to provide guidance to help individuals navigate college systems and make adjustments where needed. Though some offices must utilize a students legal name (Financial Aid, for example), every effort is made to respect our student's chosen name.

Additionally, McDaniel College provides more than a dozen all-gender restrooms across campus. We believe that the removal of gender designation from restrooms is a meaningful step forward in our commitment to inclusive excellence.

Our campus is proud to host events that celebrate our diversity. These events add to the vibrant social fabric of our community and provide opportunities for recognition and increased awareness among students, staff and faculty.

Annual UNITED Event: Students from multicultural student organizations, Global Fellows, and the Greek Community collaborate to host the annual UNITED event.  This year’s theme was, “Back to our Roots” and the program included dance performances, singers, a special performance from A1 Chops, and diverse food options representing a variety of cultures.

Though specific events and speakers change annually, our commitment to diversity programming does not. The list below provides a sampling of the kinds of events students can expect at McDaniel

Global Issues Colloquium: “Migration and Communities in the U.S. and Beyond”

This community-wide, interactive discussion of global migration provided participants the opportunity to come to a greater understanding of the forces that drive migration and how immigration shapes communities in the U.S. and in other countries.

The Office of Diversity and Inclusion, in collaboration with the McDaniel College Gender Sexuality Alliance, celebrates National Coming Out Day.

In celebration of Hispanic Heritage Month, Alina Fernandez shared her first-person, intimate account of growing up in Cuba, and the many, broad sweeping changes effecting Cuba today and into the future, as a result of Obama era politics and social and political reforms.

Mr. Muse is a Baltimore native who earned a Doctorate from Howard University, currently the Senior Pastor of Ark of Safety Christian Church and serving his third term as a senator representing Maryland's 26th Legislative District. He discussed the intersection of Race, Faith and Politics.

In celebration of American Indian Heritage Month, the Office of Diversity and Inclusion in collaboration with the Office of Student Engagement sponsored a trip to the National Museum of the American Indian. The focus of the trip was to attend the exhibit: Return to a Native Place:  Algonquian Peoples of the Chesapeake.

The Office of Diversity and Inclusion, Wellness Center and McDaniel College Gender Sexuality Alliance observed Transgender Day of Remembrance.  There was a vigil to honor and remember all of the transgender individuals who had died this year and various other events for students, faculty and staff to observe this day.

Ernie G is one of the hottest, multi-talented, young Latino entertainers in the country today. Ernie has developed his own unique form of Comedy he calls “Latino Edutainment – Educating and Entertaining with a Latino Flavor!” and has performed for many of the country’s top organizations and corporations, including Disney, Pepsi-Co, General Mills, U.S. Armed Forces, National Council de la Raza, Latin American Educational Foundation and the Hispanic College Fund. Co-sponsored by League of League of United Latin American Citizens (LULAC)

Ernie G facilitated a Leadership workshop for students to increase and maximize their leadership potential. Co-sponsored by League of League of United Latin American Citizens (LULAC)

Enzo Silon Surin, Haitian-born poet, educator, publisher and social advocate, and the author of two chapbooks, A Letter of Resignation: An American Libretto (2017) and Higher Ground (2006). He is recipient of a Brother Thomas Fellowship from The Boston Foundation and is a PEN New England Celebrated New Voice in Poetry. Enzo’s talk “We Are The Ones We Have Been Waiting For” focused on reclaiming our past in order to liberate and empower our present. Co-sponsored by Black Student Union. (Part of Black History Month celebration)

"As a Black Transgender Queer person, Kavi bridges the intersections of personal and political identity, with poems that focus on a range of topics, such as street harassment, sexuality, class, gender, race, love, relationships, grief and hope." Co-Sponsored by McDaniel College’s Gender Sexuality Alliance (GSA)

Storm Smith: The Untapped Gold Mine of Adversity that Virtually No One Knows About

This presentation invited the audience to experience the powerful story of Storm Smith, a Deaf woman of color and acclaimed creative filmmaker/visual storyteller. They learned all about her transformative journey from growing up in Los Angeles, to constantly making the ultimate decisions as a Psychology student in Washington D.C., to unexpectedly landing a dream career at a top advertising agency in New York. Co-sponsored by the ASL Program.

Henry’s presentation depicted his journey that took him from El Salvador to the United States. Henry walked the audience through his encounters with cartels; ending up in a Mexican juvenile detention center and eventually getting the opportunity go to college in the U.S.

Workshops and trainings change annually but the list below provides a sample of trainings that have occurred on our campus, some of which are on-going.

Inclusive Language: The language that we use matters. It also helps to create open dialogue with one another. Participants learn to what are micro-aggressions, their impact, and how to avoid using them. There is also a portion of workshop learning about how your words have consequences and how to have open and honest dialogue about race, sexual orientation, gender, ethnicity etc…

Multicultural Competence: It is important to learn and recognize difference cultures, backgrounds, perspectives, and how to appreciate and live within are ever changing globalized society.

The Safe Zone Program provides a network of safe and supportive allies to the lesbian, gay, bisexual, transgender, queer (LGBTQ) community at McDaniel College.  Safe Zone Training allowed a space for the McDaniel community to learn how to advocate for and provide a welcoming environment for LGBTQ students, staff, and faculty.  This training was offered multiple times throughout the academic year for Resident Assistants, Faculty, Staff, and the McDaniel community at large.

The Edge Experience was established during the summer of 2016 by the Office of Diversity, Equity and Inclusion and the Division of Student Affairs in order to assist students with their acclimation to McDaniel College. Students from Baltimore City Public Schools were invited to campus for a one-day immersion experience about life on campus, living in residence halls, navigating finances, and successfully balancing academic and social responsibilities. Though the program has evolved since its beginning, it remains a keystone experience to help underrepresented students acclimate to campus.

Learn More About The EDGE Experience 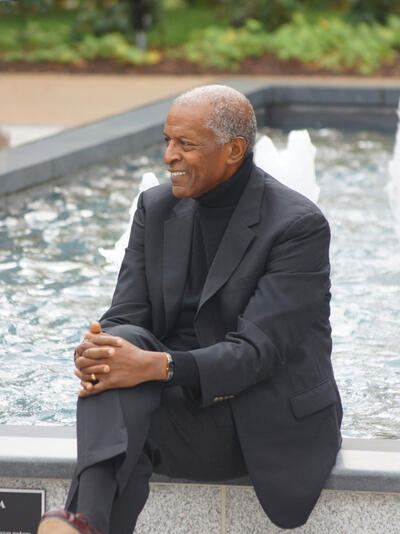 A celebrated civil rights attorney, Vic McTeer '69 has spent his life engaged in professional, volunteer and philanthropic efforts to ensure that many more successful black scholars would follow in his footsteps to earn college degrees.

In addition to the chapels on campus, an interfaith meditation room is also available to all students, faculty and staff of any religious or non-religious identity for prayer, reflection and meditation. The room is open Sunday through Saturday from 6:00 am to 10:00 pm. The Interfaith Meditation Room is a place where students can meet with local religious leaders to seek guidance and religious/spiritual support. These volunteers offer weekly office hours and assist ODI with religious and spiritual programs. The room provides Prayer Rugs, a resource library with various books (Quran, Bible, Torah), and meeting space for religious/spiritually affiliated student organizations

Director, Office of Diversity and Inclusion