The Carroll County Chamber of Commerce announced McDaniel College President Jasken among five new officers, along with a new Chair of the Board, elected during the Chamber Members Meeting on Oct. 7. Their appointments begin in 2022.

McDaniel College President Julia Jasken has been chosen to serve on the Carroll County Chamber of Commerce Board of Directors.

The Carroll County Chamber of Commerce has announced that President Jasken was included among five new officers, along with a new Chair of the Board, elected during the Chamber Members Meeting on Oct. 7. Their appointments begin in 2022.

About the appointment, she said, “I’m incredibly honored to have been selected to serve on the Carroll County Chamber of Commerce Board. Carroll County plays a vital role in the support and education of our students, and I’m looking forward to continuing to strengthen that partnership in the months and years ahead.”

According to the Chamber, new directors are eligible to serve two consecutive, three-year terms after which time they are asked to step down for a period of one year. After a one-year break, they are eligible to run again for a board of director position. 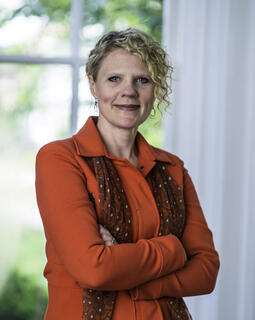 President Jasken, who became McDaniel’s 10th president on June 1, 2021, has dedicated nearly her entire professional life to higher education and most notably to McDaniel. She began her tenure at the college in 2003 as an English professor and has assumed increasing responsibility in administrative positions, serving as the college’s executive vice president and provost immediately preceding her presidency. She has overseen many of the college’s most important strategic initiatives, including the college’s signature McDaniel Commitment, as well as led the Return to the Hill planning efforts throughout the COVID-19 pandemic and has overseen the college’s diversity, equity, and inclusion (DEI) initiatives.