For the last decade, Erin Herbert ’06 Disney has been working in her dream job — except it is a dream she never even considered. The Baltimore Ravens’ digital media manager says that working in professional sports was never a goal for her, but once she was hired by the Ravens, she realized it was a dream come true to use her Art major and Communication minor for her favorite hometown team.

For the last decade, Erin Herbert ’06 Disney has been working in her dream job — except it is a dream she never even considered. The Baltimore Ravens’ digital media manager says that working in professional sports was never a goal for her, but once she was hired by the Ravens, she realized it was a dream come true.

Disney knew when she was a senior in high school that she wanted to land a career in advertising or marketing, but she also wanted to take a variety of other classes in college.

“I was drawn to McDaniel College because I liked the idea of a liberal arts education and a small campus,” Disney says. “Upon enrollment, I declared my major as Communication, which at the time encompassed media and marketing classes.”

But she also decided to take some Art classes to embrace her artistic and creative side that she had discovered in high school. After taking some graphic design classes on the Hill, she realized the career opportunities that might be available to her and switched her major from Communication to Art, specifically to focus on the area of design within advertising and marketing.

“It was during this time that I realized web designers were in much higher demand than print designers,” Disney says. “The internet and social media were on the rise, smartphones were becoming popular, and companies were beginning to care more about their digital presence.”

Unfortunately, Disney was laid off in 2009, but she made the most of her newfound free time by enrolling at her local community college to take some advanced web design and programming classes. In 2010, she was hired by Devaney and Associates to work as a graphic and web designer, which gave her the experience she needed in building and managing websites.

“A year into this position, and with some professional web skills added to my resume, I started looking for a better opportunity that would allow more career growth,” she says. It was right at that time that a colleague sent her a job listing for a digital media coordinator for the Baltimore Ravens.

“The position called for both graphic design and web skills, and it was for my favorite hometown team,” Disney says. “I updated my resume and website and applied … and here I am 10 years later!”

In 2017, Disney was promoted from digital media coordinator to digital media manager. But she’s been making an impact since the beginning. When she started with the Ravens, the main focus was BaltimoreRavens.com and the user experience on a desktop computer.

“That same year, we launched the Ravens mobile app, but it was very basic, with mostly just news and very few features,” Disney says. “Fast forward a decade and the main focus is now the mobile app and mobile web experience, since this is where we see a majority of our fans consume content.”

Disney also recalls launching the Ravens Instagram account in 2012 — they were already active on Facebook and Twitter — and having a full discussion about what the first post should be. Now, the team also has a presence on YouTube, Snapchat, TikTok, Reddit, and LinkedIn. “Due to the growth and popularity of social media, we now have a whole crew of people dedicated to these platforms,” Disney says.

Especially during the pandemic in 2020, Disney and her team were focused on thinking outside the box to bring their fans a great football experience without being able to actually attend games.

“Throughout the NFL, the Ravens digital team is often praised for being a leader in innovation and delivering an excellent user experience,” Disney says. “I am very proud of this status and to be a member of this extremely talented team.”

But Disney always thinks back to her time on the Hill when thinking about how she made her dream come true. “It was a fun and enjoyable college experience filled with so many great memories and friendships,” she says. She loves reliving tales of fourth floor Blanche, weekend breakfast in Glar (“if you could wake up in time to get there”), hanging out on “the wall,” and grabbing late-night fourth meal.

She also looks back fondly on graphic design classes with Sue Bloom, art history classes with Michael Losch, and a class on classic films with Jonathan Slade. “McDaniel College was my training camp for real life,” Disney says. “I was able to learn and develop the skills I needed to be successful in my dream career, even before I knew it was my dream.” 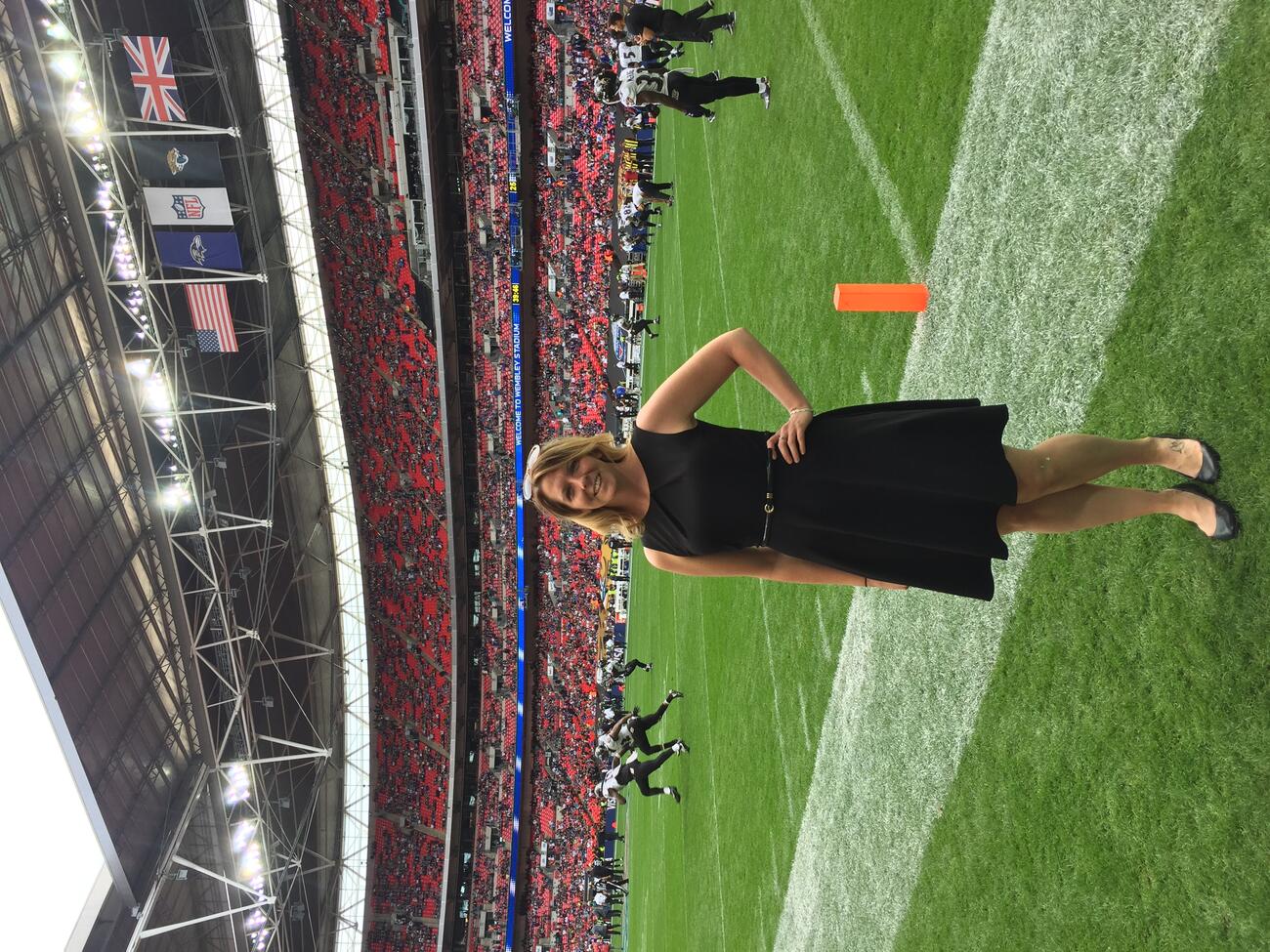