Arriving his freshman year “clueless” as to what he wanted to major in, Luke Anthony thought math sounded cool and decided to try it. After collaborative research with Math professor Spencer Hamblen and presenting their findings at a professional conference in Chicago the summer after his freshman year and interning as a software engineer and federal mathematician the following summer, the Math and Physics double major’s future was sealed.

Luke Anthony, from Bel Air, Maryland, is double majoring in Math and Physics with a Chemistry minor.

When I took my first step on the Hill, I was: nervous about making friends and so I went to orientation karaoke and after booming out a verse of “Shut Up and Dance With Me” I ended up leaving with all of the people that ultimately formed my friend group at college. I was also totally clueless about what I wanted to study and what kind of job I wanted when I graduated. My only thought was, “Math sounds kind of cool, I guess I’ll try that.”

The me who will ring the Old Main bell at Commencement is: a little older, a little wiser, and A LOT better at math.

Real-world experiences: I started off the summer after my freshman year conducting research with Dr. Spencer Hamblen on “Generalizations of Waring’s Problem,” which helped ignite my passion for math. I had the chance to see math research firsthand as well as attend the MAA annual math conference in Chicago and present our findings. After getting some research experience under my belt, I was able to participate in two incredible internships the following summer. One as a software engineer working for Lockheed Martin and the other as a federal mathematician. Both allowed me to further hone my skills outside of the classroom, discover different job opportunities available to me, and build a network to help start my career.

Aha moment: Mathematicians are some of the most informal people I’ve ever met. You can spot a mathematician in a conference or business setting by looking for the person wearing a T-shirt and shorts. As someone who loves to wear T-shirts, this was quite a plus as a career choice.

Footprints I’m leaving on the Hill: Some of the footprints I am leaving behind are in the Admissions office where I worked as a Student Ambassador helping with events and calling prospective students to answer their questions. Some are in the hundreds of trivia questions I wrote and gathered for Green Terror Programs (GTP), an event planning organization on campus that is responsible for McDaniel’s biweekly Pub Trivia. However, the largest footprints of mine on campus are probably left in LHS113, the study room of the math department. There, I spent hours working on assignments, tutoring math classes, and playing intense games of ping pong with friends and professors. I feel like that study room isn’t going to be the same without me and I know I’m not going to be the same without it!

Professor who most influenced who I have become: Dr. Ben Steinhurst and Dr. Spencer Hamblen are the two professors who have most helped me focus my goals and foster my passion for mathematics. From my first proof course, Fundamentals of Mathematics with Dr. Hamblen, to Real Analysis with Dr. Steinhurst, they have been there to support and mentor me through every step of the journey. Math is a tough subject, but the environment Dr. Steinhurst and Dr. Hamblen have developed both inside and out of the classroom makes the Math department an incredible community.

My mentor. For life.: Definitely my mom because she’s the first person I go to for advice. When my problems are a little more “mathy,” Dr. Steinhurst and Dr. Hamblen are definitely my go-to mentors for the same reasons as above.

Best class ever: Definitely Abstract Algebra with Dr. Hamblen because I am a math nerd. This was one of the two 4000-level courses in the Math department. By the time I took this class, I had a lot of experience under my belt and I could really appreciate the topic. We looked back at algebra and all its properties we had taken for granted for so long and began to understand why things behave as they do. I also felt this course was very applicable to the real-world math I had experienced in my internships and research, and I was excited to be able to apply the skills it taught me outside the classroom.

Took me totally by surprise: When I came to McDaniel, I picked Math on a whim. In high school, I did well in math, but I enjoyed political science and history far more. I don’t know what made me choose to study math when I got here, but it changed my life. I love doing math and the internship opportunities available at McDaniel are phenomenal and have greatly helped prepare me for my career in mathematics.

My favorite spot on campus: LHS113 without a doubt. My friends joke with me and say I spend more time there than in my own room. I’ve worked on assignments there, held tutoring sessions there, played Pingpong there, and even helped with redecorating the room. It is a central hub for the Math student community at McDaniel.

Most mind-boggling idea I learned at McDaniel: It may sound silly, but the idea that professors are people, too. In high school I only thought of teachers as teachers, but at McDaniel I’ve been able to interact with them not only as professors but as regular people. From annual math picnics at professors’ houses to conference road trips, I got to form real relationships with my professors.

My capstone: My Math capstone was “Maximal Rank of Elliptic Curves of Quadratic Number Fields” and my Physics capstone was “The Physics of Flat Earth (and why it’s wrong).”

What it’s about: Elliptic Curves are a type of structure used frequently in cryptography for some of their interesting properties. I looked at one particular property, the rank, which represents how many different points you need to represent the whole curve. I then attempted to find curves of particular forms with high rank.

For my physics capstone I constructed a system of models of a flat Earth and calculated the force due to gravity of this system. I then compared it to the gravity we expect here on Earth to show the inconsistencies this model presents.

What it’s really about: For math I drew a picture of a curve and then tried to figure out how many starting points I need to get the whole picture. It took lots and lots of pictures and a surprising amount of translating French math papers. I showed that the math of flat Earth is very, very wrong and I made a graphic of a bouncing ball to show it! The ball did not bounce how one would expect.

What’s next: I am currently processing for a federal mathematician position. This position is with the same organization that I interned with. Unfortunately, COVID-19 has impacted the hiring process, so my start date is not confirmed at this time, but I expect it will be sometime this summer. 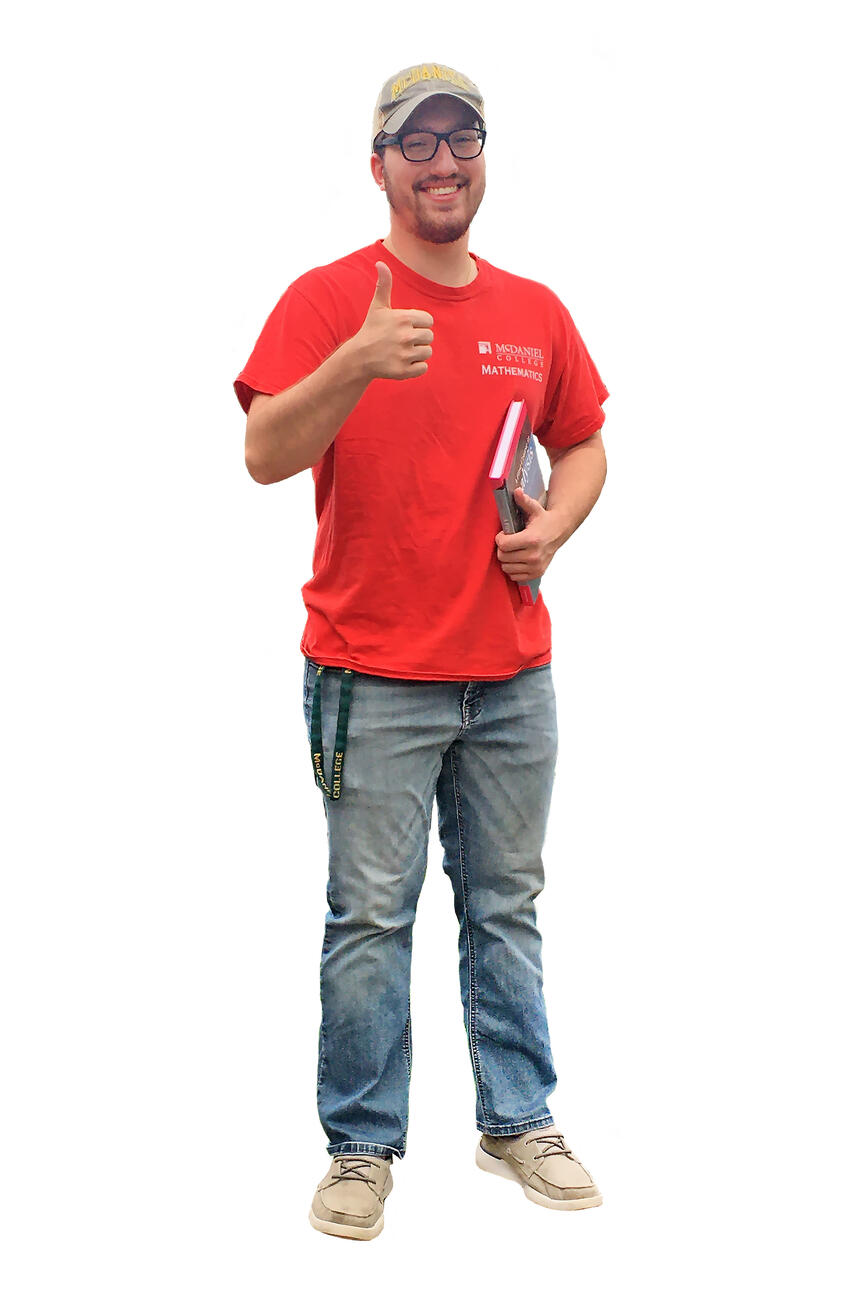