Ravi Patel, a senior at McDaniel College, has been named a Fulbright finalist for an English Teaching Assistant Award in Indonesia. Patel is a double major in Spanish and Political Science with a specialization in International Studies. He has traveled to 27 countries around the world, but there’s one place he has not reached yet.

Ravi Patel, a senior double majoring in Spanish and Political Science with a specialization in International Studies, has been named a Fulbright finalist for an English Teaching Assistant Award in Indonesia.

Patel lists San Diego, Calif., Reno, Nev., and Mexico City as his hometowns. He has traveled to 27 countries around the world, but there’s one place he has not reached yet.

“One of the reasons I applied to Indonesia was because I had never been there. It’s the last region of the world I haven’t spent time in,” Patel said. “I wanted to be able to see that and explore it. I think it is a really neat way to serve the United States and the world at large.”

In Indonesia, Patel will serve as an ambassador and engage in cultural exchange with the region he’s assigned. The program is set to begin in July.

His childhood travel experience also prompted Patel to apply for the Fulbright Award. He grew up surrounded by Latino, Indian and American cultures. Patel said he has cultural and social fluency in the United States, Mexico, United Kingdom and India. 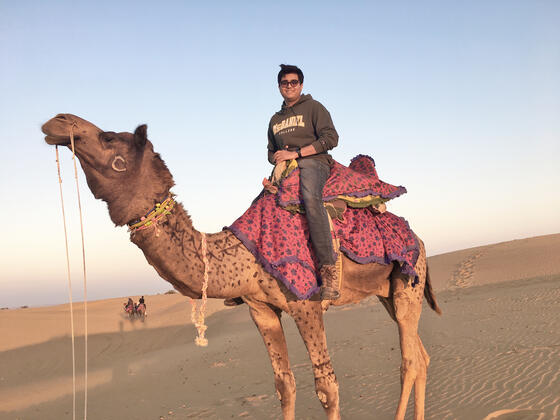 “The technical term is I am a third-culture kid. My father is Indian, and my mother is Mexican. I have always been international and globalized. This government program is right up my alley,” Patel said

During his time at McDaniel, he has volunteered with Palabras to Words, a student organization at McDaniel that helps non-English speakers learn English, and has taught English and U.S. Culture to Argentinean students at Colegio Horacio Watson in Argentina.

A Global Fellow, he has also participated in Model United Nations and serves on McDaniel’s Honor and Conduct Board. He is also active as a member of Pi Sigma Alpha political science and Alpha Lambda Delta national honor societies.

After he completes the Fulbright program, Patel plans to continue his education at the graduate level, specializing in international studies. He hopes to enter the political consulting field or work for the U.S. Department of State.

Patel is the 12th McDaniel student to ever receive a Fulbright scholarship. Fellow McDaniel senior Courtney Rosenstiehl, a double major in Political Science and French from Turnersville, N.J., has been recognized as a semifinalist for the Fulbright Award for the 2020-2021 academic year.

The Fulbright U.S. Student Program, sponsored by the Department of State, is the largest American international exchange program with approximately 8,000 grants awarded annually. More than 390,000 participants from over 160 countries have participated in the Fulbright program since 1946.