Four McDaniel graduating seniors, who served as members of the Green Terror Battalion, were commissioned as Army officers on May 21. Maj. Gen. Clement S. Coward, director of the Department of Defense Sexual Assault Prevention and Response Office, served as the keynote speaker

Four McDaniel graduating seniors, who served as members of the Green Terror Battalion, were commissioned as Army officers at 9:30 a.m. May 21 in a ceremony in Baker Memorial Chapel. Cadets from Mount St. Mary’s University and Hood College were commissioned in separate ceremonies.

Coward shared advice, noting to hold onto what pushes the cadets through each day when they are “down and tired.”

“A couple of other things that I still think about is treat people how you want to be treated and don’t forget where you came from,” Coward said, adding that success also came from the people who supported them.

A new award was created in honor of retired Lt. Gen. Otto J. Guenther ’63, chair of the McDaniel College Board of Trustees, who has provided continued care and mentorship to all of the cadets of the Green Terror Battalion over the last five decades.

Cameron Victor St Andre of Westminster, Md., was recognized with the inaugural Lieutenant General (R) Otto Guenther Leadership Award, which goes to the commissioning cadet who best exemplifies the character, morals and leadership, and lifelong dedication demonstrated by Guenther both to the U.S. Army and to his alma mater, McDaniel College each year.

The following McDaniel seniors took the oath of office and received commissions as second lieutenants in the U.S. Army: 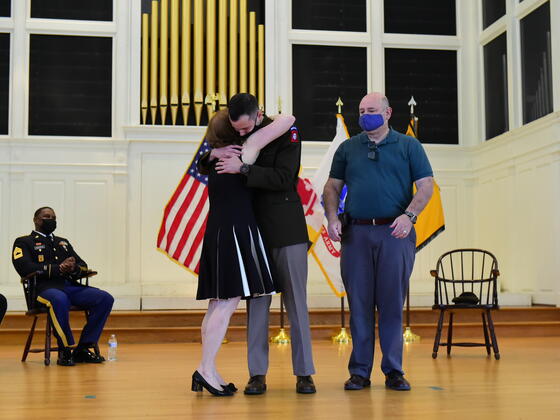 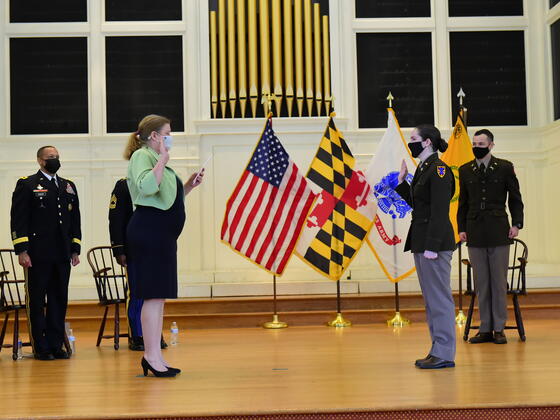 Claire Marie Mullane Milne of Springfield, Va., is a three-year ROTC scholarship recipient graduating with a bachelor’s degree in Environmental Studies and a minor in History. Milne served as president of McDaniel College’s Catholic Campus Ministry and was a member of the Phi Alpha Mu sorority. She will serve active duty and attend the Transportation Basic Officer Leadership Course at Fort Lee, Va. She will then be stationed in the 7th Transportation Brigade at Fort Eustis, Va.

Riley O. O’Hara of Fairfax, Va., is a three-year ROTC scholarship recipient graduating with a bachelor’s degree in Psychology. She completed the Cadet Coalition Warfighter Program (CCWP), formerly known as the Cultural Understanding and Leadership Program (CULP), in Guyana, South America, a clinical internship at Crown Psychological Services, and Operation Agile Leader requirements. She also competed as a member of both the McDaniel cross country and track and field teams. She will serve active duty and attend the Air Defense Artillery Basic Officer Leadership Course at Fort Sill, Okla. O’Hara will then be assigned to a permanent duty assignment at Fort Sill, Okla. 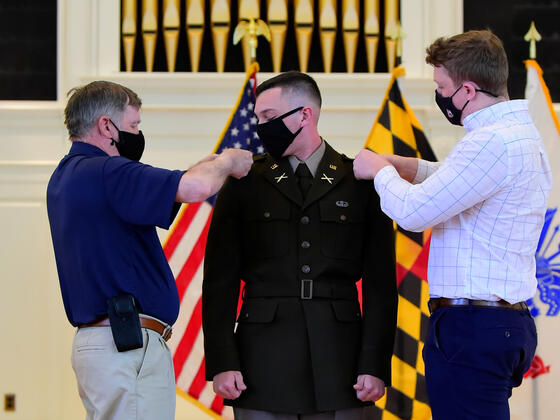 Cameron Victor St Andre of Westminster, Md., is a three-year ROTC scholarship recipient graduating with a bachelor’s degree in Philosophy. During his time as a member of the Green Terror Battalion, he completed Airborne School in Fort Benning, Ga., and participated in two Army Ten-Miler races held annually in October in Washington, D.C. St Andre will serve active duty and attend the Field Artillery Basic Officer Leadership Course at Fort Sill, Okla.